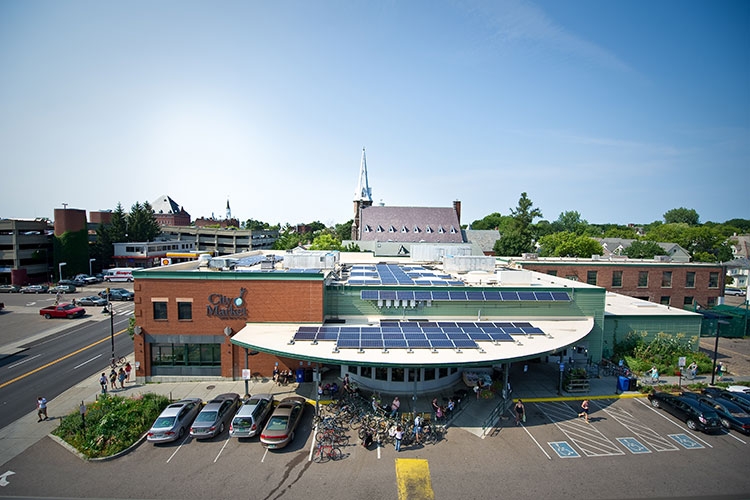 City Market partnered with Freeman French Freeman, DEW Construction Corp, VHB, Stone Environmental, Pomerleau Real Estate and many others to open their South End store at 207 Flynn Avenue in November 2017. The Co-op is built on a remediated Brownfield site and includes a deli, café, a Community Room and the Community Teaching Kitchen. Outside, customers will find a natural play area for kids and a rain garden to assist with run-off. The South End property is environmentally sustainable in a number of different ways. The store is the first in Vermont to use a transcritical CO2 refrigeration system which are more efficient than commonly used systems and have a much lower global warming potential (gwp). In addition, the Co-op placed solar tubes throughout the store and uses LED lighting with an intelligent lighting system. The Brownfield remediation work included asbestos abatement, on-site stormwater treatment, and asphalt and concrete as remedial soil barriers. Because of this work, City Market received the 2017 Vermont Governor’s Award for Environmental Excellence.

We partnered with Vermont-based groSolar and now have 136 solar panels on our roof! Click here for the full story.

Greening Up the World, One Light Bulb at a Time

City Market has teamed up with Efficiency Vermont  and Burlington Electric Department to offer low cost CFL and LED light bulbs. A variety of wattages and styles are available. As an added incentive to make the switch, City Market will recycle old household CFL light bulbs free of charge when a new CFL bulb is purchased. LEDs can be conveniently recycled at the Pine Street Chittenden Solid Waste District Drop Off Center.

Additionally, in 2011 and 2012, City Market worked with Burlington Electric Department to switch all of the Co-op's lighting systems to LED systems.

Providing consumers with a low-cost energy efficient light bulb is just one step that City Market is taking to strengthen its commitment to the environment. In 2007, the Co-op encouraged the use of canvas bags by cutting the price in half to just $5 and offering a five cent refund when shoppers bring their own bags. In 2009, we were able to refund over $14,000 to customers that brought their own bags. That helped us to reduce our plastic bag use as an overall store by 14%. From 2011 through 2014, we took this one step further and donated that five cent refund to local non-profits through our "Change for Local Non-Profits" program. Each month, we selected a local non-profit to receive the proceeds from bag reuse and recirculated those funds to area organizations that support our community. In our first year, we donated almost $14,000 in total to twelve different local non-profit. This program has now been incorporated into our popular Rally for Change program.

City Market unveiled a Bulk Water, Reverse Osmosis Water Machine in order to reduce the number of plastic water bottles being used by our customers. During fiscal year 2017, we sold almost 155,500 gallons of RO water, which is equal to approximately 995,200 twenty ounce bottles. Another bonus is that Co-op members can fill their water bottles for free!

In August 2007, we made the switch to green chemicals in store to support Green Seal Certified chemicals and to reduce our store's impact on the environment.

In 2014, we joined the EPA's GreenChill Partnership, a voluntary program in which participants adopt greener refrigeration practices to protect the ozone layer, environment, and human health. Refrigerants used by supermarkets are potent global warming gases, up to 4,000 times more harmful to the climate than carbon dioxide. GreenChill Partners pledge to: transition to refrigerants that are less harmful to the ozone layer and climate system, reduce the amount of refrigerant they use and eliminate refrigerant leaks, and adopt green refrigeration technologies, strategies, and practices. If every supermarket achieved GreenChill standards, over the course of a year the supermarket industry could save more than $100 million in refrigerant costs and reduce greenhouse gas emissions by an amount equal to the greenhouse gas emissions of 4.2 million cars (22 million metric tons carbon dioxide equivalent).

City Market is committed to decreasing food waste and to that end, our Facilities Department has worked diligently with Casella Waste Management and Chittenden Solid Waste District to continually improve our total waste diverted from landfills. During 2017, City Market diverted over 84% of its waste to composting or recycling facilities. This equates to recycling 242 tons of material, composting 273 tons and sending 96 tons of mixed solid waste to the landfill.