Valentine’s Day weekend this year, for many City Market staff and Members, was not just about sharing the love with family and friends.  Hundreds of farmers, food producers, students, and food enthusiasts descended on UVM for NOFA-VT’s 33rd annual Winter Conference.  This year, we were all sharing the love of a local food system and “Growing the Good Food Movement,” the theme of this year’s conference.  The conference workshops focused not only on technical aspects of farming and food production, but also aimed to open and continue conversations about farm and food equity, building a fair and just food system, creating access to healthy food for everyone, and creating a system where farmers and farmworkers receive the respect they deserve and a living wage.

Along these lines, the first workshop I attended was called “Milk with Dignity” and was presented by the organization Migrant Justice.  Migrant Justice has been a strong advocate for migrant workers and has been successful in improving farmworker conditions on various fronts, such as working with farmworkers to recoup back wages and workers compensation and passing legislation that allows all Vermont residents the ability to get a driver’s license regardless of immigration status.

During the session, farmworker members of Migrant Justice shared their experiences working on Vermont dairy farms.  The stories they told painted a complicated picture: while some farmworkers have been successful in advocating for better conditions from their employers, others have been subjected to cramped and degraded living conditions, wages that are less than the state’s minimum wage, and long hours. Making things more difficult is the fact that many dairy farmers are not earning a living wage themselves, as the dairy industry is increasingly becoming consolidated and supply outstrips demand, forcing milk prices down.

There are approximately 1,500 migrant farmworkers in Vermont’s dairy industry.  Migrant Justice surveyed 172 farmworkers (about 10% of the population) in 2014 and found some surprising and disheartening numbers:

In light of these findings and the increasing marginalization of not only workers, but also farmers in an industry dominated by large corporations, Migrant Justice has launched a “Milk with Dignity” campaign, modeled on the success of the Coalition of Immokalee Workers’ Fair Food Program in which retailers have agreed to pay a small premium on farm products in order to help improve farmworkers’ economic conditions.  Vermont farmworkers are working with Migrant Justice to prioritize securing fundamental human rights to dignified work and quality housing, freedom of movement and access to transportation, equal treatment and freedom from discrimination, and access to quality healthcare.  Farmworkers are currently trying to create a unified definition of what “dignified work and quality housing” should be across the state. That definition will be used to create “Milk with Dignity” standards, which farmers can commit to upholding on their dairy farms.  A third party auditor will be created to ensure farmers are complying with the standards. 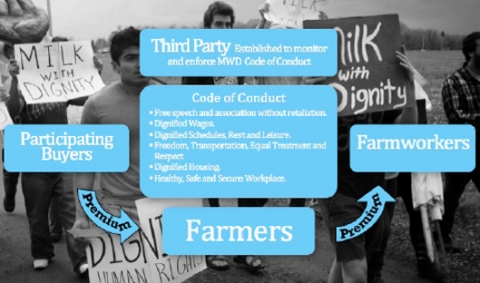 You can learn more about Migrant Justice and the “Milk with Dignity” campaign online.  If you want to continue the conversation about a fair and equitable food system, please join us and the Intervale Center at our next Dish event, Wednesday, March 18, 5:30 – 7:00pm at ArtsRiot.  Our theme for the night will be Fair Food.  You can also join us and some of our partner organizations for a showing of the documentary Food Chains on Wednesday, April 1 at 6:30pm at the UVM Davis Center.  Food Chains tells the story of the Coalition of Immokalee Workers’ Fair Food program, which works with growers and retailers to improve farmworker working conditions.  We hope to see you at these upcoming events!

Interested in finding out about our upcoming events and classes? Sign up for our bimonthly Classes and Events E-Newsletter.