Last week, City Market staff had the privilege of attending a special cheese tasting with Adam Smith, Head Caveman at The Cellars at Jasper Hill.  The topic was bloomy-rinded cheeses, those delightfully soft, often white, squiggly-molded cheeses that seem to be so popular these days.  Bloomy-rinded cheeses are usually made from pasteurized milk, as they are typically aged less than 2 months (raw milk needs to be aged at least 60 days).  For bloomy-rinded cheeses, either the milk is inoculated with a specific mold culture, or the cheese is misted with the mold culture to produce a rind that ripens from the outside in.  Most cheesemakers purchase mold cultures to inoculate cheeses, but over time, a layer of microbes coat the walls of cheese caves and eventually become very specific to place. Given this, it makes sense that The Cellars’ tag line is “A Taste of Place,” as very site-specific microbes contribute to the taste of all The Cellars’ cheeses.  Much like how the term terrior is used to discuss place-specific tastes of wine, so can the term be used when talking about cheeses.

And the Beet Goes On

This week we’re continuing an annual tradition that I’m fond of, our local food recipe competition. Picking one extra special ingredient, we ask the community to submit their favorite recipes based on that theme. It’s like Iron Chef*, but without all the pressure or the video cameras (actually, it’s not really like Iron Chef at all). This year’s special ingredient is… beets!

By now, I've had several weeks to digest the TED-style talks from the UVM Food Systems Summit on June 27. The last speaker, Sandor Katz, may have summed the day up well when he said, "Food is more than the sum of the nutrients contained in the food. It's about relationships: with micro-organisms, plants, animals, neighbors, farmers."

As we approach the August anniversary of the tremendous flooding in the Intervale 2 years ago that completely finished the growing season months early and had volunteers carrying out what produce they could amid rapidly advancing flood waters, I am reminded, potently, of how we are all in this together.

Nikolas munched on big, orange disks of carrots from Arethusa Farm Thursday night from his first ever school lunch tray. It was a proud parental moment. Later, I used local carrots to make a delicious side dish with roasted local carrots, oranges, and scallions. 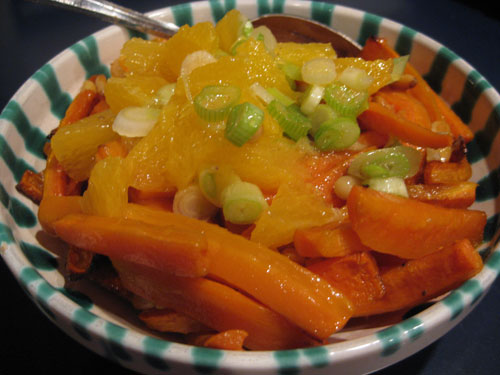