Co-op shoppers are besotted with Besteyfield Farm’s eggs, purchasing over 8,000 dozens in 2014. Ben Butterfield is the proprietor of the 650 bird chicken farm located in the Intervale, our local treasured farming mecca just a quick walk from the Co-op. On a recent tour of his farm, Ben told Co-op staffers that his biggest challenge is the cost of chicken feed. Ben was able to reduce cost by obtaining spent grains from area brewers and his hens love it. This got us thinking. Why not use some of our “spent” produce that winds up in compost bins?

We discussed the idea with Ben and he was intrigued. We decided to kick the tires and explore if it would work. The literal first challenge was the size of the compost buckets. The ones used throughout the Co-op are unwieldy 64 gallons and typically weigh 250 pounds when full. A mechanized lifter is used to get them unloaded into the compost truck. Since Ben is a one-man operation and has a pickup truck, this wouldn’t work. So we special ordered more manageable 32 gallon compost bins that would hold 100-125 pounds of compost.

About three weeks ago the bins arrived and we began a pilot project. On Tuesdays and Fridays Ben has been picking up two bins of produce compost and feeding them to his chickens. Preliminary results are so positive we are considering expanding this to more deliveries. The chickens love the added vegetables, with the unforeseen exception of potatoes, which have been easy enough to keep out of the mix. 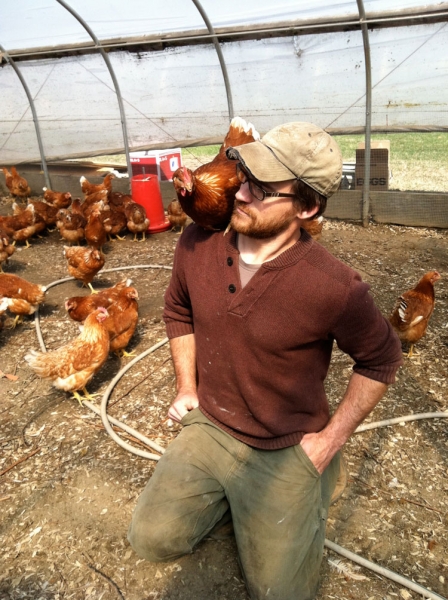 Ben and his chickens. Photo courtesy of Ben Butterfield.

This is a feel-good story for everyone. We’re closing the loop by sending vegetables to Besteyfield. The project deftly strengthens the local food system. Ben has a reduced cost for his operation and his chickens are receiving a much more varied diet. The Co-op receives his eggs and we feel good that our produce compost directly helps one of our most popular vendors.