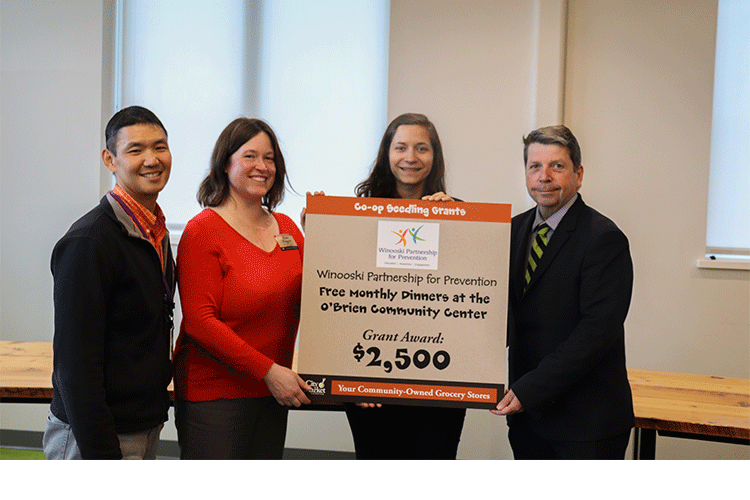 The Winooski Partnership for Prevention (WPP) employs prevention best practices in working directly with youth, parents, and community leaders and members in order to prevent substance misuse before it starts. The organization is an independent 501(c)3 charitable nonprofit organization incorporated in the state of Vermont and has been so since February 2010, existing from 2003-2010 as an organization with a fiscal agent. Their office is located in the O’Brien Community Center in Winooski, which is within walking distance of the community gardens, the school, churches, and the downtown area. They share an office with the Winooski Recreation and Parks Department and often cross-promote each other’s events and collaborate on initiatives to maximize our impact. They also partner with different organizations every month to host free community dinners that are open to the public. The dinners are well attended by families and community members and are a good platform to promote WPP’s mission to prevent substance abuse.

The Winooski Partnership for Prevention proposes to use Seedling Grant funds for their monthly community dinners at the O’Brien Community Center. WPP hosts about 9-10 community dinners per year, all of them free and open to the public. For each dinner, they partner with a different organization to allow them an opportunity to promote their mission to a wide audience. In the past, they’ve partnered with the Winooski Recreation and Parks Department, the Winooski School District, the Winooski Family Center, Vermont Works for Women, Outright Vermont, Age Well, and many more.

This is an existing project that will require additional funding to cover food costs, staff time, childcare during the dinners, interpretation services, and event space costs. The dinners are typically attended by 40-50 community members, including city leaders and school board members, as well as families, senior residents, members of the New American community, and residents with a history of poverty. An estimated 15.3% of the population in Winooski speaks a language other than English at home, and WPP provides interpretation services when funds allow in order to ensure the information at the dinners is accessible to everyone.

The Winooski Partnership for Prevention uses the community dinners as a platform to promote their prevention messages. In a survey carried out by Winooski’s organizations for parents, respondents stated that they saw community forums and print materials as one of the best methods of being reached, and these community dinners provide both an opportunity for community engagement and discussions. Print materials are also available for attendees to take home.

While this is an existing project, additional funding will help WPP strengthen the substance of the dinners and allow them to promote to a wider audience in Winooski. They would like to take a more professional approach to marketing and evaluating the dinners, including a well-designed poster and a communication plan. They would continue to provide interpretation services through the AALV during the dinners, and with the funding, they would also have their marketing materials translated. They plan to implement a thorough pre- and post-event evaluation process to make improvements and to gain an understanding of the best means of marketing the dinners. Funding will allow more staff time to focus on reaching out to potential partners who share WPP’s vision of promoting health and would allow WPP to strengthen their relationships with current partners.

On average, Winooski residents have lower incomes and qualify for more state and federal food security systems than residents in the rest of Chittenden County. The median household income in Winooski is $45,974, and for comparison, in neighboring South Burlington it is $65,840. Over 72% of the student population at Winooski School District qualify for free and reduced lunch. 26.1% of residents are living in poverty in Winooski, with about half of all residents living below 250% of the federal poverty level. Furthermore, individual and household median earnings in Winooski are about 8% and 20% lower, respectively, than those median earnings in Vermont as a whole.

The dinners will strengthen the local food system by offering a healthy and free meal once a month to families and community members who often face food insecurity, and any leftovers are donated to the food shelf and residents of the Howard Center’s Allen House, a facility that provides housing and professional social support for people who have barriers to achieving economic independence. The dinners are held in the community room at the O’Brien Community Center, which is accessible to most families in Winooski and shares a space with the Winooski Memorial Library, which provides free meals for kids under the age of 18 during the summer.

The dinners also provide a space for connection— to each other, to public works and services information, civic discussions, and to free or low-cost services in Winooski. These dinners have been one of the best-recognized and utilized forums for sharing important information with community members, with presentations provided by city leaders on budget proposals, as well as discussions about increasing acceptance and awareness of gender and sexual identity. Dinner discussions have also covered the topics of housing authority programming and availability, preschool programming, and health education. Smoking cessation materials are provided by 802Quits for attendees to take home, as well as materials and resources from ParentUp for parents to talk to their kids about substance abuse.

Furthermore, one of the goals for the dinners is to promote health and wellbeing. Aside from partnering with health providers who share resources and information, WPP make a concerted effort to provide a healthy, warm meal with a primary vegetarian option, sides of fruits and vegetables, and fresh water as a beverage.