Our winter pea project has been successful, although we are still continuing to collect data from ongoing trials at the UVM Horticulture Research Center. The data we have gathered at the UVM Horticultural Research Center illustrates that five of the USDA developed cold-tolerant varieties are potentially suitable for overwintering in Vermont. Overwintering survivorship percentages were ~30% on average, with the highest being 43.9%. 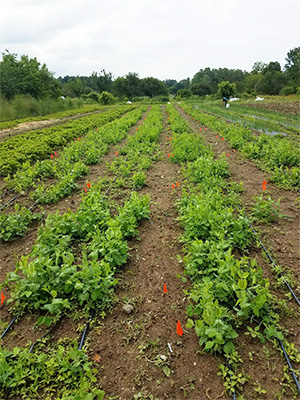 A second field trial is currently underway, with results expected by summer 2020. To increase winter pea survival, two variables, time and depth of planting, have been changed. Field peas were sown two weeks earlier than the previous year. We hypothesize with the additional time, the peas may become more established to withstand variable snow cover and freezing temperatures better. Additionally, we hope that the deeper depth increases the survivorship of overwintering peas due to the soil acting as an insulator protecting the plants from the cold temperatures. These changes to planting time and depth may hopefully increase the survival of winter peas, which will bring us one step closer to a viable overwintering legume option for Vermont organic producers.

Dr. Eric von Wettberg’s research group’s major area of interest is overcoming the loss of crop genetic diversity from extreme population bottlenecks such as domestication and intense breeding practices. By merging together genomic and evolutionary ecology approaches, their goal is to naturally improve the resilience of crops to better deal with global climate change in agricultural systems. They have primarily focused on improving legumes for developing countries like India and Ethiopia and specifically have conducted research on forages, field pea, faba bean, chickpea, lentils, and fenugreek. They will use newly developed Non-GMO cold -hardy winter peas bred at USDA and Washington State University as a starting point to screen for cold tolerance to improve winter pea varieties for cover cropping and forage applications in Vermont.

There are nearly 800 vegetable farms in Vermont, producing a range of fresh produce and helping to support the vibrancy of the state’s 90 farmers’ markets and the $189 million spent in Vermont on local food (VT Agency of Agriculture, 2016). With 583 organic farms as of 2016,

Vermont also has the highest per capita rate of organic farming in the United States. Despite the popularity of fresh local produce in Vermont, local vegetable producers face significant challenges in maintaining soil fertility, reducing erosion, and nutrient loss. A sustainable strategy to combat these challenges is cover cropping, which is the method of planting a crop, not for its food production, but for its ability to manage soil erosion, soil quality, water, pathogens, and biodiversity. The amount of cover cropped land in the United States has increased nearly 100% over the past five years, and this dramatic increase can primarily be accounted to cover cropping’s ability to increase farm profitability and soil fertility while simultaneously lowering agriculture's impact on the environment (SARE, 2017). Cover cropping accomplishes this by lowering the amount of agricultural inputs (fertilizers, pesticides, herbicides, etc.) required by farmers, thus, lowering their cost and limiting the amount of harmful chemicals being released into the environment by agricultural runoff.

There are many different species and types of cover crops, but arguably, the most beneficial cover crops are legumes, due to their ability to fix nitrogen, reduce pathogens, and promote soil microbial diversity. However, due to Vermont’s short growing season, there is insufficient time for vegetable producers to cover crop and produce their vegetables. One possible method to alleviate this problem is to cover crop during the winter season when vegetable production is not possible; however, there are limited overwinter legume cover crops available that can tolerate Vermont’s harsh winters. Hairy vetch is currently the most popular conventional overwinter legume that can withstand these conditions but has severe drawbacks for organic farmers. Hairy vetch is hard to terminate using conservation tillage, such as chisel plows or disks. The most efficient method of terminating hairy vetch is an herbicide program using a mixture of glyphosate (Roundup) and dicamba (Banvel, Diablo, Oracle, and Vanquish). Due to regulations and organic principles, the use of these herbicides is not feasible for organic farmers, thus making hairy vetch an unsuitable organic overwinter legume cover crop.

A popular overwinter legume cover crop used by vegetable producers in other parts of the United States is winter pea. Winter pea is an ideal green manure crop due to easy termination and its ability to break down quickly. Despite winter pea’s potential benefits to our local organic farmers, currently available winter pea varieties are unable to tolerate Vermont’s winter conditions. However, non-GMO cold-hardy winter peas newly developed by the USDA and Washington State University may provide the answer for a suitable organic Vermont overwinter legume cover crop.

This project proposes to test the viability of these newly naturally developed winter peas here in Vermont by growing them over two winter seasons at local farms. The trials will inform the team if these winter peas can be incorporated into local organic farms’ crop rotations to increase soil fertility, vegetable production, and reduce soil erosion. They will be working in conjunction with the UVM extension program to provide results of this study with the local farming community. Also, they will add project information and results to the UVM extension website (www.uvm.edu/extension/cropsoil) to reach an online audience. Lastly, the results of the study will be published in peer-reviewed scientific journals that reach breeders and the agronomic scientific community worldwide.