The Milk with Dignity Standards Council (MDSC) is a non-profit organization dedicated to implementing and enforcing the Milk with Dignity Program, which brings together farmworkers, farmers, buyers, and consumers to secure dignified working conditions in dairy supply chains and strengthen our local Vermont food system. Since early 2018, we have monitored farms’ compliance with comprehensive standards that address employee housing, workplace health and safety, wages, schedules, non-discrimination and retaliation, and other work environment conditions. Milk with Dignity is the only social responsibility program in the country ensuring that standards for labor and living conditions are met on dairy farms. 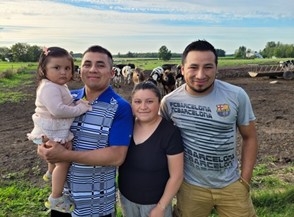 Since 2019, as part of our work to improve farmworker housing conditions, MDSC has been conducting the first-ever data-based study of indoor air quality in farmworker housing. To test air quality inside workers’ housing, we install portable, user-friendly monitoring devices that measure particulate matter, carbon dioxide, temperature, and humidity over the course of weeks or months. The large majority of dairy workers live in on-farm housing, often in close proximity to sawdust and manure storage, dairy barns, chemical storage, and other sources of respiratory hazards. In some cases, indoor air quality is adversely impacted by overcrowded, deteriorated housing or the use of gas stoves for cooking without adequate ventilation. Though indoor air quality can vary by season, occupancy rate, cooking habits, and other factors, MDSC’s data collection has consistently shown that there is significant room for improvement in many farmworkers’ housing.

In 2022, City Market’s Seedling Grant has enabled MDSC to expand our air quality monitoring to more than 40 housing units and, in response to our findings, pilot different methods to create healthier indoor air for dairy workers. In conversation with farmworkers and farmers, and using a hierarchy of controls analysis to remove or reduce respiratory hazards, we’ve taken several steps:

The support of the City Market community has helped make this work and these partnerships possible, and we couldn’t be more thankful. We’re looking forward to our next steps: installation of new modular farmworker housing, before-and-after analysis of the impact of HEPA purifiers in housing, possible expansion of the induction stove project, and continued air quality monitoring. To hear more about MDSC’s work for healthy farmworker housing and partnerships with Efficiency Vermont, Vermont Energy Investment Corporation, and Vermont Green Building Network, check out this webinar on indoor air quality improvements to farmworker housing and this panel on energy equity from the 2022 Vermont Energy and Climate Action Network Conference!

The Milk with Dignity Standards Council is a non-profit organization dedicated to implementation, monitoring and enforcement in the Milk with Dignity Program, which brings together farmworkers, farmers, buyers and consumers to secure dignified working conditions in dairy supply chains and ultimately strengthen our local Vermont food system. MDSC audits dairy farms participating in the Program to verify their compliance with the Code of Conduct, a set of human rights standards defined by dairy farmworkers. MDSC also investigates complaints lodged through the program’s worker support line. MDSC works closely with participating farms to help them reach compliance with the Code, including through technical assistance and training. When audits or complaint investigations find Code violations, MDSC works with participating farms to create corrective action plans to address identified areas of non-compliance with workers’ rights.

Nearly all migrant farmworkers in Vermont’s dairy industry live in housing provided by their employer. While MDSC has worked with several farms in the Program to construct new, healthier housing units and make much-needed repairs to existing units, many farmworkers continue to live in decades-old mobile homes, deteriorated farmhouses, and in some cases, rooms located inside dairy barns.

The simplest, most obvious solution to poor indoor air quality—opening windows and doors to let in outdoor air—is unworkable in many housing units, even during the brief periods when Vermont’s weather permits it. Shared housing is often occupied at all hours of the day and night because employees work staggered milking shifts around the clock. Farmworkers can’t easily flush their house with outdoor air when it is empty. Even where ventilation with outdoor air is possible, opening doors and windows may not reliably introduce clean air. Housing tends to be located directly on farm premises, where outdoor air quality can be compromised by particulate matter from cows’ sawdust bedding, feed, and dirt roads; airborne insecticides or agricultural pesticides; diesel exhaust from farm vehicles; and fumes from nearby manure storage pits, cow barns, and strong cleaning chemicals.

Migrant farmworkers’ disproportionate exposure to unclean air in their homes and worksites is a symptom of decades of environmental racism that has deprioritized the health and safety of people of color and underinvested in efforts to eliminate or reduce environmental hazards that affect BIPOC and migrant communities. To address this racial inequity, MDSC proposes to:

The result of the project will include a tool for replicable problem-solving processes to improve unhealthy air quality in farmworker housing. MDSC uses the deeply tested occupational safety and health approach known as the hierarchy of controls, by which workers in any job can analyze their own workplaces for various types of health and safety hazards and approach each in search of the best workable solution. Elimination of hazards, if possible, is preferable to substitution of hazards (such as use of alternative less toxic chemicals). This in turn is favored over engineering controls (like machine guarding), which are better than administrative controls (such as training on methods to approach a hazardous aspect of one’s work in a way that reduces the risk of injury or illness). When all these are unworkable, personal protective equipment is left. Various tools, some developed by other organizations, and some internal, are in use to address common dairy farm hazards, but none to our knowledge exists that is tailored to respiratory hazards in farmworker housing.

This project will help low-income Vermonters and BIPOC community members in rural, often highly isolated areas of the state, to improve their health and participate in the development of a replicable model for improving farmworker indoor air quality. The majority of the farmworkers supported by this project are immigrant people of color who have no other access to environmental justice and health and safety protections in their housing or worksites.

By 2023, MDSC plans to have gathered data on the baseline indoor air quality and existing ventilation infrastructure (if any) for all housing units occupied by migrant workers at Milk with Dignity farms. Using the baseline measurements that we have collected and continue to collect, we will be able to quantify changes to farmworkers’ indoor air quality before and after the installation of bath fans or other improvements. The structure of the Milk with Dignity Program, which gives MDSC the power to require health and safety improvements and farms the financial support to carry them out, will allow MDSC to guide farms through the process and ensure that indoor air quality does not fall off the bottom of farms’ to-do lists. Because migrant farmworkers often seek support from MDSC when they need to access medical care, we may also be able to track over time the rate at which farmworkers seek medical care for respiratory systems related to poor air quality.

The Milk with Dignity Program is the product of years of organizing and popular education among Vermont’s dairy worker community by Migrant Justice.  Founded eleven years ago, Migrant Justice grew out of the needs, desires, and human rights organizing vision of Vermont’s community of immigrant farmworkers.  Through popular education and regular membership assemblies and coordinating committee meetings, Migrant Justice’s membership has defined the Milk with Dignity Program as its solution to longstanding human rights abuses in the dairy industry, which at their worst include forced labor, human trafficking, and fatally serious workplace hazards.

The dairy industry relies on an immigrant workforce laboring long hours in dangerous conditions for low pay. Female farmworkers are particularly isolated and at highest risk for discrimination, harassment, and violence. At worst, farmworkers are vulnerable to forced labor and fatally hazardous working conditions.

Milk with Dignity flips this paradigm of labor exploitation on its head. Following worker members’ own survey of dairy workers, which demonstrated statistical evidence of the widespread abuses in the dairy industry, Migrant Justice began analyzing different strategies of worker organizing.  Leaders reached out to the Florida-based Coalition of Immokalee Workers (CIW), which has transformed the country’s tomato industry through their Fair Food Program (FFP).  Migrant Justice leaders visited Florida to see firsthand the successes of the CIW, beginning a deep relationship of collaboration that exists to this day.  Upon their return, Migrant Justice leaders developed the Milk with Dignity program, adapting the principles of the FFP to the context of the northeast dairy industry.

In October 2017, Ben & Jerry's signed a landmark agreement allowing for the implementation of the Milk with Dignity Program within its supply chain. Since February 2018, the Milk with Dignity Standards Council has enrolled 100% of Ben & Jerry’s Northeast dairy supply chain in a multi-step process, including individual farmer orientations to the program and worker education sessions on each farm.  Since February 2018, the MDSC has investigated 644 worker complaints and has resolved the majority of them, with the remainder still in process.  The fourth round of annual audits is underway. To date, with some exceptions, farms have been cooperative and transparent, as the MDSC works together with farmers and workers to identify issues and develop plans to resolve them on workable timelines to meet the standards in the Code of Conduct.

Ben & Jerry’s pays the Milk with Dignity Premium to Participating Farms, which in turn pass through a small portion of that Premium to eligible workers on their farms who are paid below the Vermont rural livable wage for single persons in shared housing.  Participating Farmers and workers alike have remarked on how useful this premium has been in a challenging economic time for all who work on dairy farms.

The Milk with Dignity Program’s implementation in Ben & Jerry’s dairy supply chain is a groundbreaking step forward for a promising new approach to racial and economic justice and to corporate accountability: Worker-Driven Social Responsibility (WSR). Today, Migrant Justice is mobilizing the community to call on grocery chain Hannaford to ensure that dairy farmworkers who make its store-brand dairy products possible have the same protections now benefiting farmworkers who make the cream for Ben & Jerry’s. The respiratory health project MDSC proposes here will result in tools that farmworkers in the future in Hannaford’s supply chain and in others down the road may also use to protect their health from similar risks. This sets an example of how dairy farming can be done throughout the state and region with safer and less exploitative conditions. In the absence of efforts such as these, long-term health problems such as respiratory ailments are often externalized out of a supply chain’s employers and buyers, and instead borne by marginalized communities directly. Preventing those problems with best practices for health and safety strengthens the local food system starting with the most marginalized people working to hold it up and makes it more sustainable for all.