Presented in Honor of Don Schramm

Do you know a Community Champion?

The 2022 award winner will receive a $300 City Market gift card and gift from a local partner. The winner will be announced at our Annual Member Meeting in October, 2022. 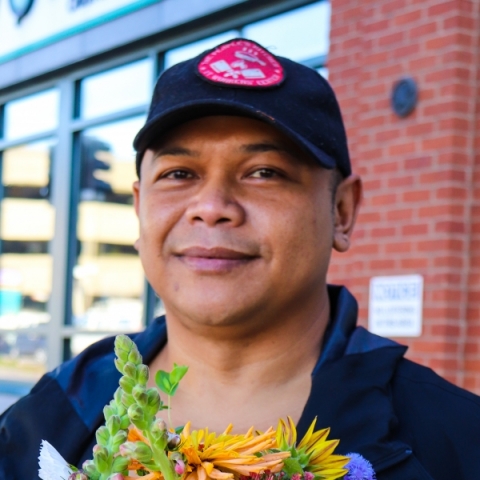 FaRied has worked tirelessly to help coordinate the People’s Kitchen out of the Vermont Workers’ Center, creating a group dedicated to providing nutritious food at low or no cost to our community. Recognizing the People’s Kitchen is a group effort, we want to highlight the hard work of FaRied starting this project in 2011 and keeping it running and expanding as needs change. Historically, the People’s Kitchen has risen to the occasion to feed the masses at events such as May Day celebrations, the UVM nurses strike, and during the Black Lives Matter movement in Battery Park. In light of the Covid-19 pandemic, the People’s Kitchen has not only provided meals, but has also coordinated farm stands with fresh produce free of charge for community members. FaRied and volunteers have coordinated this project out of various community and home kitchens, manifesting co-op principles by creating access to healthy (and delicious!) food and creating a community that every citizen can rely on. 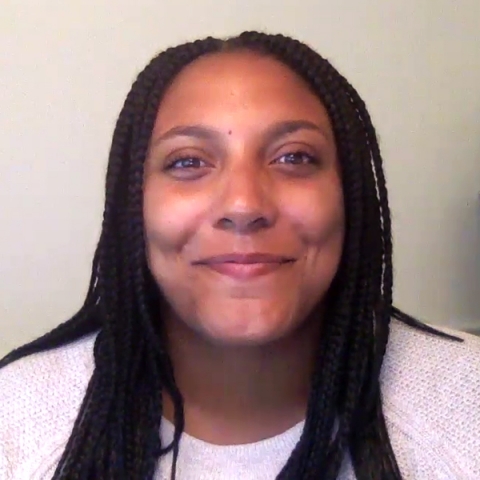 Ashley Laporte is a Steering Committee Member of the Vermont Racial Justice Alliance and the Director of Integrated Marketing at Seventh Generation. As a person of color who was born and raised in Vermont, she understands the contradictions that exist in our community around race. At this tenuous moment in our history, Ashley has courageously stepped up to confront the systems and structures that perpetuate systemic racism in our city and state. Ashley has organized city and state rallies to listen and hear from black voices. She has stayed up until countless hours of the night waiting “online” and “in line” to vulnerably share her life experiences for both public comment and testimony at city council meetings and the state on race and police reform. In the rawest of moments and the most fraught times, Ashley is dedicated to equity in our community.

We want to share appreciation for all of this year’s nominees and the incredible work they are doing throughout our community: Ashley Laporte, Carolina Lukac, Mellissa Cain, Meredith Hoisington, Sarah DeSilvey, Serrill Flash 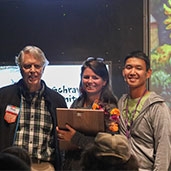 Since 2012, Dr. Janet Carscadden has taken on much of the meal planning and organizing for Old North End Community Dinner, a monthly free and delicious meal open to all and served prior to the Neighborhood Planning Assembly for wards 2 and 3. Janet volunteers numerous hours every month making this event a staple of the Old North End community. She joined the team in 2012 and has since added an international theme to each mostly local and organic meal. Janet is the owner of Evolution Physical Therapy and Yoga Studio since 2006 to present. Janet started Evolution to create a space where yoga would be accessible to everyone in the community, and where people would experience the benefits of therapeutic yoga.  She lectures throughout New England on the Science of Yoga, and trains healthcare providers in the therapeutic benefits of yoga. 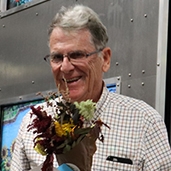 Ed began volunteering with New Farms for New Americans (NFNA) in the fall of 2016. A retired dairy and vegetable farmer from Randolph and a relatively recent transplant to Burlington, Ed has given his heart and soul to the refugee and immigrant farming community since moving to Burlington. He's been a champion for the program and its myriad needs. He's been working tirelessly to build relationships with existing and new partners, secured plant donations, strengthened the infrastructure at the farm to its best yet, repaired irrigation systems and developed relationships with the participants who bring agricultural knowledge and traditions to Vermont from Somalia, Burundi, Bhutan and Burma. Ed has taken his enthusiasm for food and farming and become a friendly and familiar face in the refugee farming community. Please join us in congratulating Ed for being the 2018 Don Schramm Community Service Award recipient. 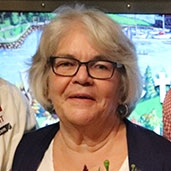 Bridget D. Meyer has participated in an impressive number of volunteering endeavors in both Burlington and Essex and has had an active role in the Co-op since its days as a buying club. Her daughter, Grace, describes her as “the most dedicated, resourceful and inspiring volunteer (and person) I know.”  Bridget plays a large role in helping coordinate free Sunday breakfasts at the Chittenden Emergency Food Shelf and also volunteers extensively for the Essex Food Shelf. Bridget did a lot of early volunteer work that helped in the formation of the Onion River Co-op (when it was a buying club), the Burlington Farmers’ Market, and the Community Health Center. Bridget has served on a large number of local food and community-focused boards and has volunteered in a number of capacities for various youth programs both in Essex and Burlington. Her extensive work with youth in both Burlington and Essex has led her to being a surrogate mother/grandmother/friend to many kids over the years. 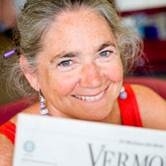 Megan Humphrey is part of the glue that binds the community in the Old North End. She has the unique ability to bring together the young and the old, the new to town and those who have lived in the ONE their whole lives, the college students and the locals. Whether she is riding her bike around the neighborhood in a sequined top selling her homemade greeting cards at the ONE Ramble, getting her hands dirty with a neighborhood gardening project, serving a community meal, or photographing the lake, she is supporting the ONE Community with warmth and grace. As the founder of HANDS (Helping and Nurturing Diverse Seniors) she brings care and attention to elderly community members who may otherwise feel invisible. Megan is seemingly everywhere, always helping out, often in the background making sure that all have a voice, all are represented, all feel welcome, and all find joy and beauty in their lives. 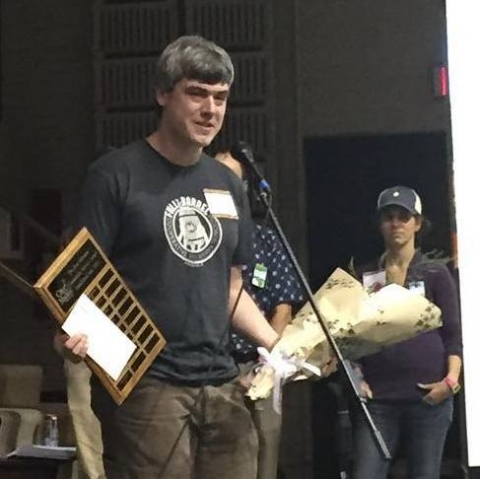 Matt is a resident of Burlington who received his Master's Degree in history from UVM in 2011, where is wrote his thesis on the establishment and development of the Vermont State Employees Credit Union during 1946 to 1973. Matt is one of the people behind "Cooperative Vermont" which is a multimedia initiative aimed at increasing awareness of, and fostering conversation within, the Green Mountain State’s cooperative movement. He is also currently working on a Cooperative Brewery Project in Burlington. Matt is working closely with Full Barrel Brewery Co-op and their Members to secure financing, create a business plan, seek new Members, and coordinate events. In addition, he recently worked with a mobile home park in the New North End to assist them in starting their own cooperative. Please join us in congratulating Matt for being the 2015 Don Schramm Community Service Award recipient. 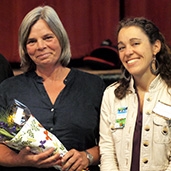 At our Member Meeting on September 17, 2014, we honored Member Julie Rubaud with the 2014 Don Schramm Award!

You may know Julie as the owner of Red Wagon Plants in Hinesburg (and perhaps if you don’t know Julie personally, you may know of her father Gerard Rubaud). Julie has a rich history that intertwines with many of the Co-op’s partners (and she’s one of our vendors). She started Red Wagon when she was working for Diggers' Mirth, where she started back in 1994. Julie participated in the Intervale Center’s Success on Farms program back in 2008 and then started working part-time for the Intervale Center in 2010. Julie, through Red Wagon Plants, has been a consistent supporter of Vermont Community Garden Network. We also have a couple of fun facts: Julie grew up in France and was a very accomplished competitive dressage rider throughout her childhood. If you haven't met Julie, we can introduce her by way of this short video interview from the spring of 2014.

Please join us in congratulating Julie and thanking her for her many contributions to our community! 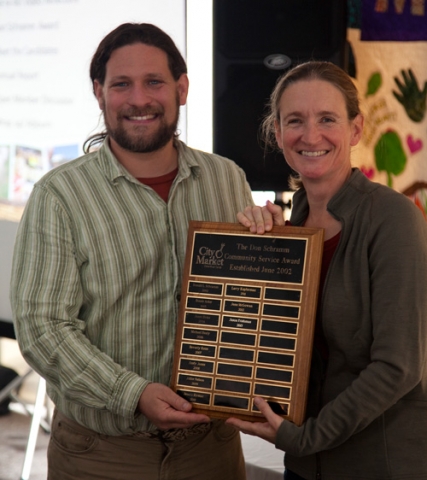 Jason teaches a variety of great fermentation classes at City Market. He is passionate about sharing food skills as a way to empower people and help them live healthy, fulfilling lives. By day, he’s a therapist up the road at Networks, on weekends he runs the FolkFoods stand at the Burlington Farmer’s Market, and in the evening he moonlights as one of our class instructors, showing people what to do with healthy, local vegetables!  Congratulations, Jason! Jenn has been active in the farm to school movement in Burlington since 2002. Jenn developed and then managed the Healthy City Youth Farm program from 2002-2009. There, she ran a gleaning project at the Intervale that harvested and distributed 30,000 pounds of surplus produce a year. In 2010, she stewarded Healthy City through an expansion that brought the hands-on farm to school program onto school grounds and broadened its reach to all students in the Burlington School District.

In the spring of 2012, Jenn officially joined Burlington School Food Project staff as the Grant and Program Manager. In her new role, Jenn will continue to empower young people to grow fresh foods that nourish their bodies and enhance their educational experiences, ultimately creating a visible and lasting step in school food change. Congratulations, Jenn!

The Board of Directors awarded the Co-op’s 2011 Don Schramm Community Service Award to Larry Kupferman.

Back in 1973, Larry Kupferman was one of the signers of Onion River Cooperative's original Articles of Incorporation, and Larry was also one of the Co-op's first paid employees. He has continued to serve and contribute to the Burlington community ever since, including stints as the Executive Director of the Champlain Valley Office of Economic Opportunity (CVOEO) and currently as Director of CEDO, the city's Community and Economic Development Office.

Larry's story is an example of one of the great possibilities embedded within the cooperative model: a person can step into a community-owned and democratically-controlled cooperative at whatever level of interest and ability they have. They can learn and grow within the cooperative -- and can then use what they've learned as they find other ways to serve the community. All of our members, employees, and board members can take a bit of inspiration from Larry's example! Congratulations, Larry! The Co-op’s 2010 Don Schramm Community Service Award was given to Jess Hyman. Hyman was nominated through her volunteer work with Grow Team ONE and the Archibald and Riverside Neighborhood Gardens. The Co-op member who nominated Jess writes: With her leadership, many of my neighbors have access to organic, healthy vegetables. Classes are also available in learning to preserve and cook their harvest with her help. Jess has a very warm and welcoming heart. She is able to reach out to our very diverse community and make everyone feel comfortable. All of Jess’s work supports the Co-op’s mission to promote local access to healthful choices, strengthening the local food system and supporting the cooperative model. Congratulations, Jess! Abbie Nelson is the Education Coordinator of NOFA Vermont and the VT Food Education Every Day (VT FEED) Director involved in all aspects of local purchasing and professional development of school food service. She has been a teacher for over 20 years in regular and special education, and worked on an organic vegetable and flower farm. As part of NOFA Vermont and a VT FEED partner, she has been working in Vermont schools linking Food, Farm, and Nutrition education for 8 years. Her role has been focused on school food by connecting kitchen managers with local farmers, helping farmers with agricultural education on their farms, training school food service personnel, and teaching school staff how to introduce new foods to students. Congratulations, Abbie!