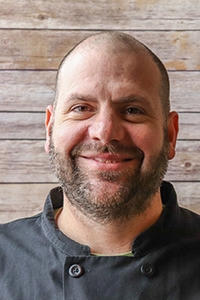 Chef Michael grew up on a converted dairy farm in New Jersey. His passion for food was fostered by his Italian mother and aunt, who were avid home cooks. In 1995, Michael graduated from the Culinary Institute of America (CIA) in Hyde Park, New York.

Michael then honed his culinary skills at acclaimed restaurants such as, Tribeca Grill in New York City, The Chantecleer Restaurant in East Dorset VT, and Equinox Resort and Spa in Manchester VT.  From 2003 to 2007, he was the p.m. à la carte Chef Instructor at the New England Culinary Institute. While at NECI, Michael took a year off after Hurricane Katrina to perform relief work as the Chef for Deployed Resources at the FEMA base camp in New Orleans.

Prior to settling in Vermont with his family, Michael was the Chef de Cuisine at Daniel Boulud’s Feast & Fêtes catering company in New York City and sous chef at Boulud’s Restaurant Daniel.   Prior to joining the Co-op, Michael has lent his talents to several local restaurants as well as owning a private chef business.