Earth Day is April 22nd, and the global theme for 2021 is “Restore Our Earth”.  Here are some ways to love the planet that little extra bit while visiting the Co-op:

Bring in all your reusable bags!

Committing to Sustainability: Wildcrafting and Foraging

Mild weather and plenty of rain means we’re in that precious window of spring where young sprouts pop up, and the wet ground is a happy habitat for wild edible like fiddleheads, ramps, and wild mushrooms. Known for their tasty flavors packed into tiny bites, these wild edibles are only available for a few fleeting weeks, but they are definitely worth seeking out.

For the Love of Fiddleheads

Springtime in Vermont is a long-anticipated season. After long months in the bitter cold and the wintry snow, it’s a happy sight to find the colors of nature bloom out from underneath. My favorite sight? The bright green springy coils of fiddleheads! Move over root veggie stew, it’s time to add some springtime flavors to the menu. My favorite spring recipes feature the addition of this ingredient and the taste always reminds me of the warm weather to come. Fiddleheads are a tasty vegetable, they’re easy to use, and they pack a nutritional punch to boot.

I was surprised to see a few yellow dandelions blooming close the ground just over a week ago when the days were still quite chilly.  These plants are hardy!  While some people may be annoyed by pesky dandelions growing in their lawns and gardens, these healthful plants are actually one of the first spring foods you can forage from the land (if picking, be sure to harvest plants that are in an unsprayed area, at least 20 feet from a road, and not near sidewalks or trails).

Reaching for the Sun

The peas are coming up in my garden. That means we can practically count down the number of days until we will see locally-grown peas in the markets and grocery store. I can't wait. 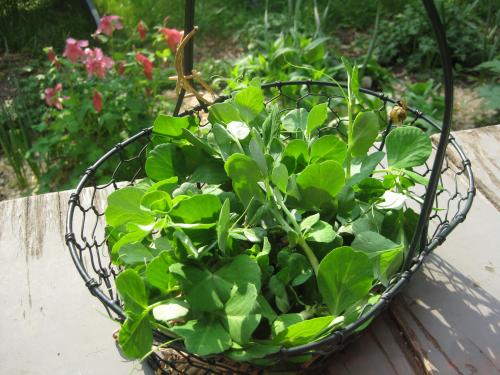 What Does Well in the Rain?

It may be wet, but we have rhubarb, a pretty hardy perennial despite all the rain. There's one more excuse to take to the kitchen on these chilly days of spring. 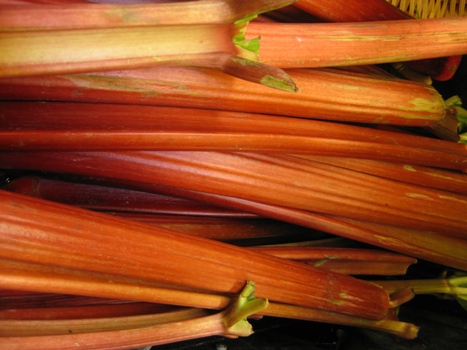 Ruby rhubarb takes the chill off the spring

This spring, there are two new products at City Market that I’ve wanted to play with in the kitchen – Gleason Grains sifted whole wheat pastry flour, and Animal Farm old-fashioned buttermilk. They both come together in Irish rhubarb cake: 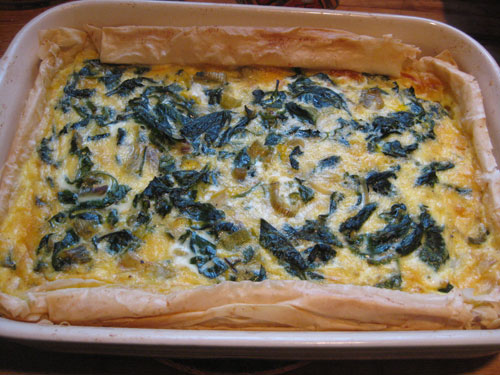 Rhubarb is a perennial that makes its appearance right about now, sending thick, juicy stalks up out of the ground and large, lush, inedible leaves. It's pretty and pink in cake. 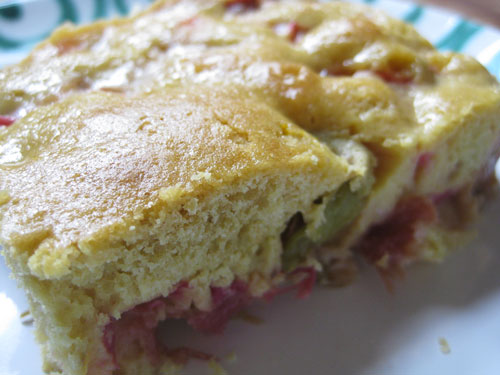 When I lived in Brooklyn as a graduate student, I had a favorite Japanese restaurant that I would go to after a particularly grueling day. Slipping into a seat at the sushi bar, the first thing I would order is “gomae,” a Japanese spinach salad with sesame paste. 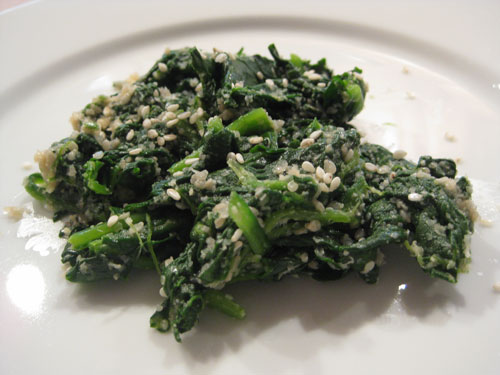 Andy and I would mull over the dressing on the salad with each bite, but alas, before we had arrived at a conclusion, it would be gone, fleeting and delicious.

We’re still getting early, greenhouse spinach from a few small farms at the Co-op. 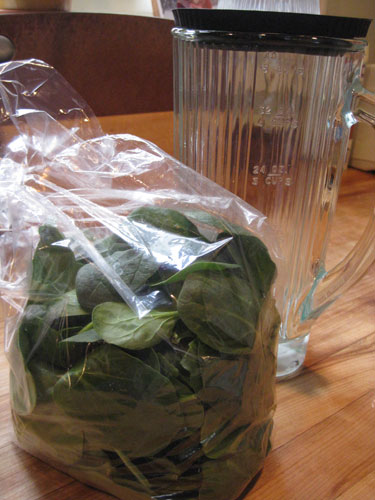 Baby spinach soon to become pesto (you can use baby spinach or regular leaves).

The spinach is “on again, off again” for the next 2-3 weeks, according to Produce Asst. Manager Jason Pappas. After that, we should see a steady spring-time supply of the good green stuff, so there’s no reason not to pick up a bag!