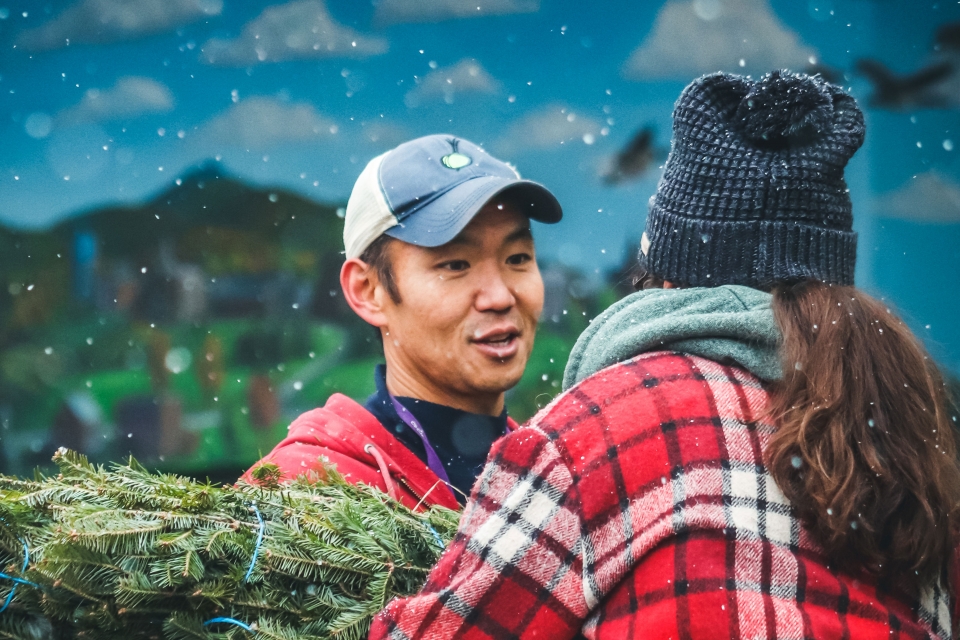 Did you know that the Tashiro family joined the Onion River Co-op the very same day they moved to Burlington? We recently sat down with City Market’s General Manager, John Tashiro for a conversation about his best Co-op memories and how the Co-op has impacted him and our community. Check out our conversation below!

I started at the Downtown store when it was a one-store Co-op and was in my GM role for about two years before we opened our South End store. I think we probably peaked sales at $42 million in that one store. It was only because everyone pulled together – and by everyone I include not just our staff but the understanding of our customers and our Members – that it worked so well. When we say Thanksgiving was crowded – I mean literally there were lines going back to the peri (perishables) cooler. And people were jam packed, and yet very understanding. I like to say, people come to the co-op to connect, and bump into each other – metaphorically but also physically! The Downtown really personified that. That’s what really makes the Downtown so special, to have had a memory like that.

I was curious, what drew you to City Market in particular and what from your past experience best prepared you to lead in this community?

The Co-op really is an amazing hybrid model. It is owned by our Members, but we do run a business. We’re very mission-driven, and at the same time need to be able to meet our community needs through our retail offerings.

So my background – I started out in business, in corporate. I worked for Coca-Cola for 12 years in various parts of the world on customers and new products, on events like the Olympics, as well as marketing and branding. I learned a lot, I had a wonderful time, I worked with some incredibly smart and good people. But I wanted to have more peace of mind and do work that I felt could make a difference. I ended up joining FairTrade International, where I negotiated the global deal with Ben and Jerry’s on behalf of FairTrade, which is how I got to learn about Burlington. The experience was extremely rewarding because you’re helping small scale farmers, typically in developing countries, that don’t have the means or even the ability to negotiate fair prices for the products that they grow. For me, that was a pivotal moment: the work felt extremely rewarding.

Ultimately I had the opportunity to help set up FairTrade America. And eventually an opportunity came up to join 1% for the Planet, an environmental nonprofit. And in time that led me to this GM role at the Co-op. I was ecstatic to take the job, and almost seven years have gone by. But that’s all a long way of saying that I think the Co-op has this non-profit side and this business side. I feel I developed a lot of business acumen early in my career under some amazing people – I received great training. And at the same time, for the last 15 years I’ve worked in nonprofits or mission-driven organizations that have given me lots of perspective on what I call the “head and heart.” And I probably am more heart than head, I have to admit – but that’s why I was so excited to take on this role at the Co-op. I feel the work I can do at the Co-op really fits my skills well and also fits my values well.

What are you most looking forward to in our next year?

If you think about where we’ve come from, dealing with the pandemic and staffing issues and supply chain issues, we’re really trying to find a more settled new normal. Not just for our organization, but for our community, I’m really looking forward to possibly moving from a pandemic to an endemic type of situation. I know that’s not something I can control, or we can control as a Co-op. But if I had one wish that would be my wish, because I think all of us have endured so much uncertainty in our schools, our community, our hospitals, our nonprofits, and our businesses.

As things become more normal, I look forward to being able to connect with our staff. We used to have an almost full day of new staff orientation, from 9 in the morning until 3 or 4 in the afternoon. And I would always kick off those sessions with a GM overview. One thing I introduced within the staff orientations was a question: What is one thing that we may not know about you? It became something of a “John-ism.” I would share mine too, and I would try not to repeat ones I’d used before. That was something I so looked forward to, because afterwards, it allowed me to connect with that person a bit more. I enjoy working with people and getting to know people. I’m just naturally curious. 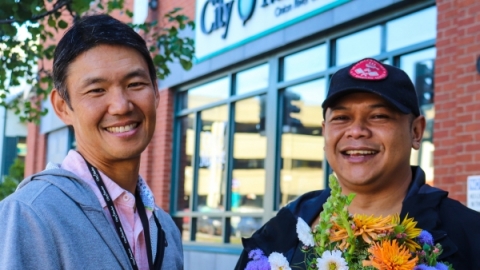 How has City Market impacted you, and how has it impacted our community?

When we think about a grocery store in a town, we think about how it provides food for the community. And I think in the case of the Co-op, we have gone way beyond that to be a partner to the community. When we talk about food access for all, that is something we have really taken to heart. The Co-op has throughout the years invested heavily in terms of time, partnerships, and financials to really work within the community to play that role.

The other piece is our support for local businesses. We’ve had so many examples where we could have made a product in house and yet we chose consciously to work with an outside, local vendor. I’ve heard stories time and again from farmers: “I started off with a handful of kale, selling at the Co-op, and now I sell multiple pallets.” When we hear stories like that, the impact the Co-op has had on the community is clear. From making food available, accessible, and affordable through Food For All programs, to our relationship with Feeding Chittenden and other community partners, to our work with local businesses – our impact is I think significant.

For myself personally – and some people might find this a burden, but I don’t – I feel like I am on call 24/7. And I am also visible 24/7. Often when I am just out in the neighborhood or the community, or even in the airport or on a flight, people from the community approach me. I’ll be walking down the aisle and someone across the aisle will say, “Are you the manager of the Co-op?” And I’ll say I am. And we’ll get to talking a little bit. And sometimes people will say “oh there’s this product I think you should look at.” I need to be available or be willing to engage at a moment’s notice. And as part of that, I’ve had to study, or stay up to date on things – whether it be around the organic certification and the GMO topic that’s now coming back, or what’s happening with the city or the state, or the state of the local economy. It’s really been a motivator to be studious, be diligent, and always be prepared for the unexpected.

What is your favorite Co-op memory?

This will come full circle! I mentioned earlier about how I learned about the Co-op. My wife Patty and our daughter Kayla and myself first came to Burlington when Kayla was seven. We arrived in the morning and by the afternoon we had learned about the Intervale Center, where we thought we could do some berry picking at Adam’s Berry Farm. When we got there, we learned that Adam’s Berry Farm had moved. So here we were, looking at this vast field on this beautiful blue-sky day in September. And we saw people in the field. I suggested we just go out and help them, and Patty and Kayla agreed.

We walked out into the field and we saw about seven people and they were all weeding. We asked if we could help. And they looked at us, and they said “yeah, you can help.” And for the next two and a half hours, we just weeded with them under the sun.

Afterwards, we came into town for the first time. We had never been to Downtown Burlington before. We were walking down South Winooski, and we just happened to look at this picture on the side of a building, and the picture was of the people we just helped. And Kayla said “Daddy, those are the people we were just helping.” And we looked and it said “Arethusa Farm.” And I said, “We should check this place out.”

So we went in, and we went to Customer Service, and we asked “What is this place?”

And the person at the Customer Service desk - I think it might have been Jess – said, “Oh we’re a food cooperative.”

And I said, “Really? So do you take memberships?”

I knew about co-ops because Fair Trade is based on the Co-op Principles. We joined on the spot. And so that was our connection – we became Members of the Co-op on our first day in Burlington and have pretty much shopped only at the Co-op ever since. So that’s part of what makes me think, well, it was meant to be.