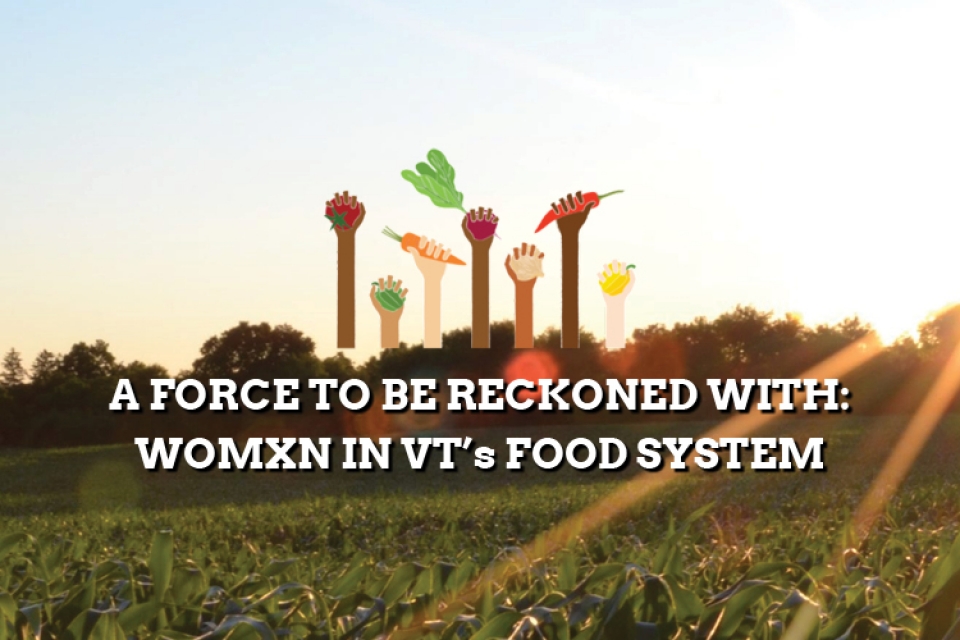 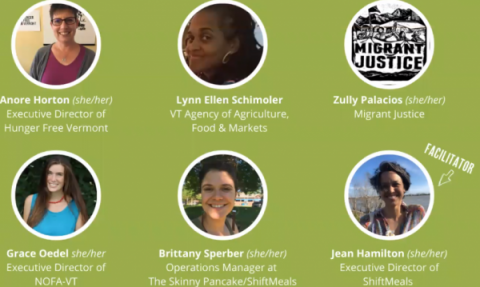 The theme of this opening discussion was how Vermont’s food system has been impacted by COVID-19 and the varied responses to these impacts. The moderator opened with a broad context of what gave rise to this series (gendered social structures that contribute to the systemic disempowerment of women), and how the impacts of the crisis are magnified by intersectionality of race, ethnicity, and gender. The phrase we hear so often in these days of crisis, “we’re all in this together,” actually reveals deeper disparities. What ideas do we hold that lock us into patterns of inequity? How do we get to systemic change? First, we have to change our minds.

One of the main goals of this series is uplifting voices that are often sidelined. Something I really appreciated at the beginning of the webinar was a discussion of the term “womxn”, which is designed to be more inclusive of non-cisgender women (including trans and other nonbinary-identifying folks). “Femmes” refers to people who, regardless of gender or sexual identity, choose gender presentations/expressions that are typically more feminine. The use of these terms creates a more welcoming, open, and inclusive space, which is another of the overarching goals of this series.

Panelists opened the discussion by answering “hot seat” questions about how the pandemic had affected their lives and their work. Different connections and interwoven threads between the panelists and their stories arose as each spoke. One of the interesting topics that came up was how COVID-19 has increased a tension between farm viability and equitable food access, and the many ways that farmers and food producers are spinning their tactics to fit a new reality while simultaneously being aware of and attempting to mitigate that tension. The theme of “flexibility” arose multiple times during the discussion, both personally and organizationally. As a viewer, I really enjoyed the concept of a “relational economy”. The willingness to help each other and be supportive, to foster a sense of cooperation rather than competition, will help us move more towards a state where we are better prepared for these types of sudden, unpredictable events. Overall, the hour was filled with voices connecting and sharing with one another, offering viewers a glimpse into how life has changed and the far-reaching effects of systemic inequities in time of such flux.

The second installment in the series, “The Future of Farming is Femme”, was held the following Thursday, and featured a whole new panel of voices: Hannah Baxter, Gleaning and Food Rescue Manager at Intervale Center; Corie Pierce, Owner of Bread and Butter Farm; Susie Walsh Daloz, Food and Farm Director at Vermont Youth Conservation Corps.; and Angela deBettencourt, Food Rescue Coordinator at Feeding Chittenden. The panelists described how all sorts of systems intersect when thinking about food and farming, such as ecology, business, plant and soil science, environmentalism, politics, economics, and more, so many different people can find their own interests within the broader umbrella of farming. They also stressed the importance of peeling back stereotypes and assumptions about who farms/who is a farmer, in order to allow more people, especially womxn and femmes, to feel included in the agricultural sphere. However, panelists emphasized how just removing the barrier of stereotypes isn’t going to fix other systemic inequities, such as issues of land ownership and access to capital, education, and markets. 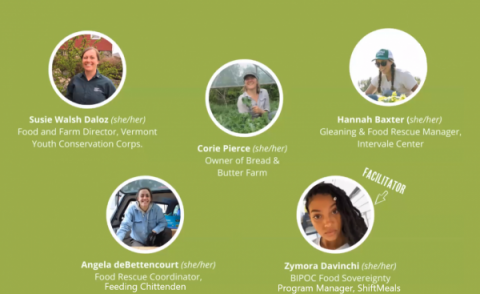 As an interesting continuation from the first part of the series, many spoke on the importance of connection and networking, in person and virtually, and a shift away from viewing farming as a competition and more towards land stewardship. COVID-19 has certainly limited the chances womxn and femme farmers have to meet face to face, but connection has found a way through virtual and socially distanced events.

To read a recap of the first webinar and watch a recording of the stream, please click here; for the second installment, follow this link. The series continues into October, and we’d love to have you join us for future webinars, so please follow this link to find more information on the series and how to sign up!