Swede midge is an invasive fly from Eurasia that will undoubtedly threaten the viability of local organic production of Brassica crops within Vermont. The midge attacks all varieties of Brassica oleraceae (kale, collards, cauliflower, broccoli, kohlrabi, etc.) and Brassica rapa (canola, Chinese cabbage, etc.). Midge damage can prevent broccoli and cauliflower head formation, curl leaves, and distort organs, resulting in crops that are unmarketable. Because there are no organic methods that are currently effective in controlling the midge, there is a critical need to identify control strategies for disrupting midge activity. This lab is the only lab in the United States currently working on developing pest control options for organic growers, and the only lab working on swede midge.  This project is being led by Yolanda Chen and the Insect Agroecology Lab.

Swede midge, Contarinia nasturtii (Diptera: Cecidomyiidae), is an invasive fly that is currently threatening the production of Brassica or cole crops in Vermont. Swede midge is specialized to feed on plants within the family Brassicaceae, which includes crops such as: cabbage, broccoli, kale, cauliflower, bok choy, canola, and 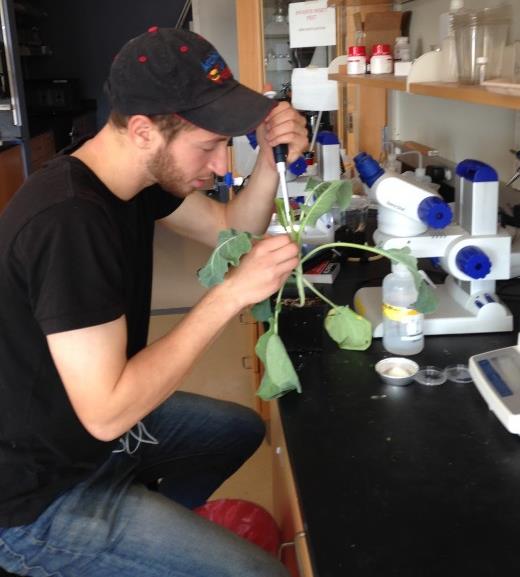 Brussels sprouts. These crops grow well in Vermont’s cooler climate, and are therefore an important source of revenue for the local vegetable growers that supply vegetables to City Market. Most of the growers that grow brassica crops for City Market and the regional wholesale distributor, Deep Root Organic Coop now have swede midge on their farms. The midge is particularly difficult to control because its young (larvae) develop in the growing tips of plants, where they are protected from foliar insecticides. Midge damage can cause a complete loss of the large head for broccoli, cauliflower, and cabbage. On leafy greens, midge damage can cause curling of the edges. For conventional growers, the most effective way to control the midge has been to use systemic neonicotinoid insecticides, but concerns on the effects of neonicotinoids on bees prevent this from being a viable sustainable option. For organic growers, the situation is more urgent- there are no options available for organic growers to manage this pest, and very little is known about the biology of the midge.

The Insect Agroecology and Evolution lab at the University of Vermont is constantly testing novel techniques to organically manage this devastating pest. We used the City Market Seedling Grant to determine how many midge larvae are necessary to cause the complete loss the marketable yield of cauliflower. A better understanding of how many larvae are required to produce an unmarketable cauliflower head will allow us to determine how effective new management techniques need to be in order to prevent yield losses

To test if the timing of midge infestation and number of larvae on plant damage, we applied set numbers of larvae (1, 5, 10 or 20) from our lab colony to cauliflower plants that were either 30, 55 or 80 days old using a micropipette (Figure 1). We then took damage measurements at different time points on the infested and non-infested control plants, using an established scale for broccoli and cauliflower damage. We were also interested in how plant age at the infestation time affected the damage severity. 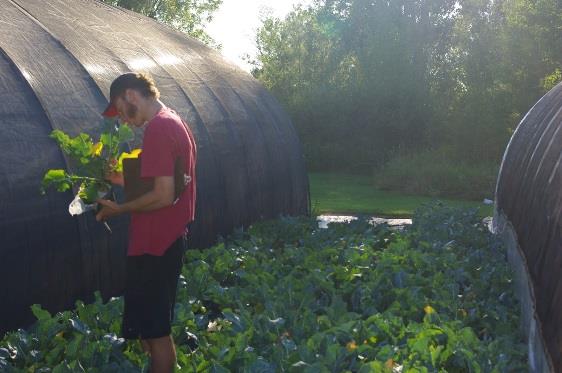 We observed the plants and recorded severity of swede midge damage symptoms three times--at 3, 6 and 10 weeks after transplanting (WAT; Figure 2). We used a rank system to assess damage known as the Hallett scale (Figure 3). We considered a score of 1 to be the economic threshold, where any plants with a score of 1 or higher would be considered to be unmarketable. We used R software for statistical analysis to determine the significance of the relationships between timing of infestation and number of larvae on damage.

We found that the plants that received more larvae had higher damage scores. However, when larvae were applied influenced the damage scores, with plants infested at 55 days scoring higher in damage than plants infested at 30 or 80 days old. We conclude that plants are most susceptible to swede midge infestation when they are around 55 days old, and that 20 or more larvae per plant reduce yield. These results are useful for determining a damage threshold for cauliflower. The positive finding was that although our data revealed a significant effect of number of swede midge damage in cauliflower, even our highest treatment (20 larvae per plant) was not enough to cause all plants to produce the most severe damage symptoms. We currently have experiments underway to determine how many eggs and larvae one individual female will typically place on a plant. By generating thresholds, we can identify how much we need to suppress the midge populations in order to achieve economically-viable harvests.

The Insect Agroecology and Evolution Lab at the University of Vermont is one of only two labs in North America that is currently researching sustainable pest management practices for swede midge. Much of the information on biology, behavior and of the midge is still unknown. Given that swede midge has already resulted in complete yield losses for organic broccoli growers in western NY and Vermont, there is an urgent need for effective control tactics for organic growers. Results from experiments such as this one are valuable resources for aiding growers in making pest management decisions.