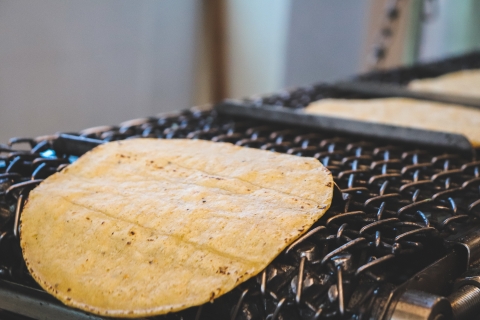 Founded in 2015 by April and Azur Moulaert, Vermont Tortilla Company is owned and operated by two food loving ecologists turned food producers. From what started as a passion for food produced in a sustainable manner, Vermont Tortilla Company was born out of a desire to bring delicious organic corn tortillas to the Vermont market. During April’s and Azur’s annual trips to Mexico, they quickly realized their deep love for corn tortillas that were produced from corn grain and they realized that you could not find anything like this back in Vermont. This is when they got the idea to create what is now Vermont Tortilla Company.

After some research, they connected with a tortilla maker in Portland, Maine, named Lynn Rowe of Tortilleria Pachanga, who has been a huge mentor to April and Azur during their early stages and still is to this day. They soon after decided to move forward with purchasing equipment and a production location, which is located in Shelburne, Vermont.

Vermont Tortilla Company currently sources NOFA certified organic corn that’s grown by Adirondack Organic Grains, which is located just across the lake in Essex, New York. However, in the future they hope that Vermont farmers and growers will grow special ancestral varieties of organic corn that they can source and use.

Vermont Corn Tortillas prepares their corn tortillas from nixtamal, which is corn that has been cooked and soaked in a mixture of water and food grade lime which helps break down the pericarp (seed coating) of the corn. Once this process is complete, the corn is then ground and pressed into tortillas.

Their tortillas are produced with organic non-GMO corn and are naturally gluten free with no added preservatives. Their product is simple yet delicious, made with only organic corn, water and food grade lime which holds an earthly yet intense flavor.

You can purchase their 6” and 4” tortillas in the cooler adjacent to our bakery items.