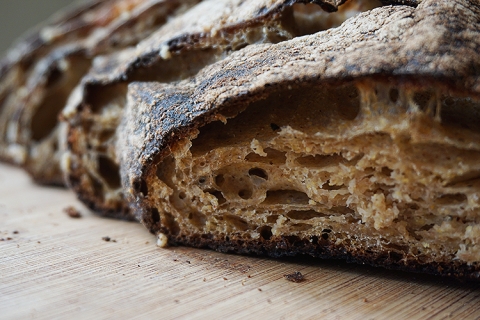 After 6 years of baking at the Bread & Butter Farm, Adam Wilson is moving his operations to Huntington, VT and starting his own bread company, Running Stone Bread.  Adam was the co-owner of Bread & Butter Farm with Corie Pierce for 6 years, where he was in charge of Pasture Management and Baking. You may also have seen Adam at the Burlington Farmer’s Market where he ran the Vermont Grain Project.

Adam will be combining the best of both worlds at Running Stone Bread as he integrates what Bread & Butter Farm offered as well as adapting off some of the breads that were offered at the Vermont Grain Project. His new bakery consist of 2 renovated shipping containers, one of which houses the oven and another which houses the production space and millhouse. At Running Stone Bread, Adam will use locally-grown grains and create freshly-milled flour which will be turned into naturally-leavened dough to create delicious hearth-baked breads. Adam is excited to embark on his new project as it represents “an opportunity for me to renew and
re-enliven my commitment to my craft: transformation!”

You can find Running Stone Bread at City Market on Wednesday's and Saturday's!